The Europe-Georgia Institute, in cooperation with the Friedrich Naumann Foundation – for Freedom South Caucasus, and Wikimedia Community User Georgia launched a project aiming to develop content related to the topic of Freedom in Georgian Wikipedia. The EGI volunteers translated 40 articles related to liberalism, liberal values and liberal thinkers, enriching the content of Georgian Wikipedia.

Implementation of this project was especially important for us due to several reasons: First of all, compared to majority of research papers or peer-reviewed articles, access on Wikipedia articles is far easier and free of charge, significantly increasing the number of viewers and readers Despite the fact that Wikipedia articles are not as reliable as research papers / peer reviewed articles (with reliability rate of 95% or more), the reliability of Wikipedia is still pretty fair – 80%. Considering its other strengths, it makes Wikipedia one of the most important websites ever existed. 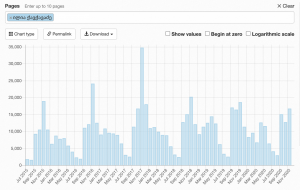 The views of “Ilia Chavchavadze” article on Georgian wikipedia by month.

The project is even more relevant taking into the account current circumstances during Covid-19 pandemic. As a result of restrictions and lockdowns people have to spend more time at home than as usual, which increased internet consumption rate and respectively – use of Wikipedia. Based on statistics namely in Georgia, it is obvious that the number of viewers on Wikipedia drastically increased after the first lockdown in April-May – reaching up to 28-29 million views by June and the trend is similar after the second lockdown in November as well, increasing the number of views compared to previous months.

It is clear and doubtless that education is paramount for a liberal and democratic development of Georgian society. Wikipedia serves as the easiest way to get information about different topics. Apparent lack of articles about liberal movements and important historical figures of liberal thought on Georgian Wikipedia served as an inducement to start this project. Georgians, whether they know English or not, deserved to have easy access to important information about Liberalism and liberals. This project contributed to make free access to information much easier. 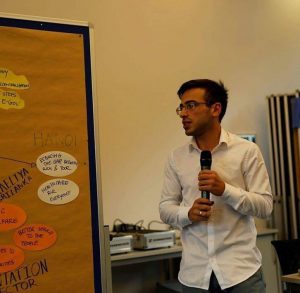 2 research papers were created during the project: the first one was about one of the most important persons in the history of Georgia – Ilia Chavchavadze, written by EGI’s junior researcher, Mr. Rati Kobakhidze. The Wikipedia article about Ilia Chavchavadze is viewed around 15 000 times each month, making it Wikipedia’s 4-th most popular article annually. But despite such popularity, information in this article had been scarce.The paper concentrated on civic activities of Ilia Chavchavadze, who created the foundation of Liberalism and Georgian civil society in the 19th century.

Another paper discussed the emergence of Liberal thought in Georgia in the 19-th century and compared it to Liberal movements since Georgia regained independence from the Soviet Union in the 90-s. This paper was written by the researcher of the First Republic of Georgia Research Center of the Tbilisi State University, Mr. Giorgi Javakhishvili. Such comparative analysis of Liberal movements is novel in Georgia and contributes a lot to scientific research of political ideologies in Georgia.

Both of these papers were first published on EGI’s web-page, then adapted to Wikipedia and published there, to ensure the public’s direct and easy access to them.

40 young activists and students joined the project to voluntarily translate 40 articles into Georgian, enriching Georgian Wikipedia with 40 high-quality articles and making access to information much easier.Topics of these articles ranged from important liberal thinkers to to different movements and basic Liberal terms. Following successful implementation of the project, it’s now possible to read articles on Georgian Wikipedia about Harm Principle, Ludwig Von Mises, Right Libertarianism and 40 other articles on different topics.

Following successful implementation of this project Georgian public has access to a wide range of important information about liberalism – in Georgian language, free of charge and easily accessible on a platform so popular as Wikipedia.

This is the direct and most pleasing result of this project, implemented by Europe-Georgia Institute in cooperation with Friedrich Naumann Foundation and successful due to tremendous hard work of many young volunteers.