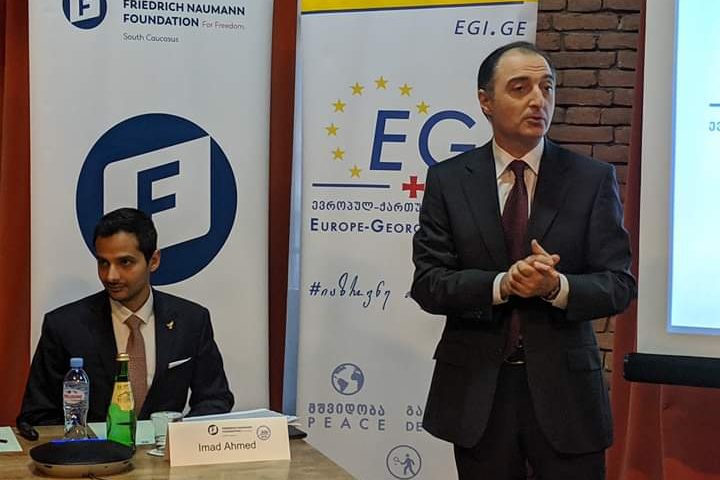 The Europe-Georgia Institute and the Friedrich Naumann Foundation – for Freedom South Caucasus invited a group of European politicians, journalists and representatives of civic sector and academia to Georgia.

We invited our good friend from the Liberal Democrats, Mr. Imad Ahmed, an economist and a PhD researcher at University College London, who first joined the Liberal Democrat party in 2008, is an approved candidate for parliamentary selection within the party and is a member of several organisations within and related to the party to speak about “The current political situation in the UK and the role of the Liberal Democrats in British politics”; and former Ambassador of Georgia to the United Kingdom HE Ambassador Giorgi Badridze to speak about “Brexit: Implications for Britain and Europe”.

This meeting is the first attempt to create a tradition of Oliver Wardrop Discussions to bring together British and Georgian politicians and young leaders and foster dialogue and cooperation between the countries and will be held annually.

The “Europe in a suitcase” is the continuation of an international project series which up to 2013 had been implemented by the European Academy Berlin with the support of the Robert Bosch Stiftung and other foundations. The Friedrich Naumann Foundation for Freedom supports and developed the project in South Caucasus and aims to bring closer European and Georgian young leaders, representatives of Academia, young politicians and members of civil society.