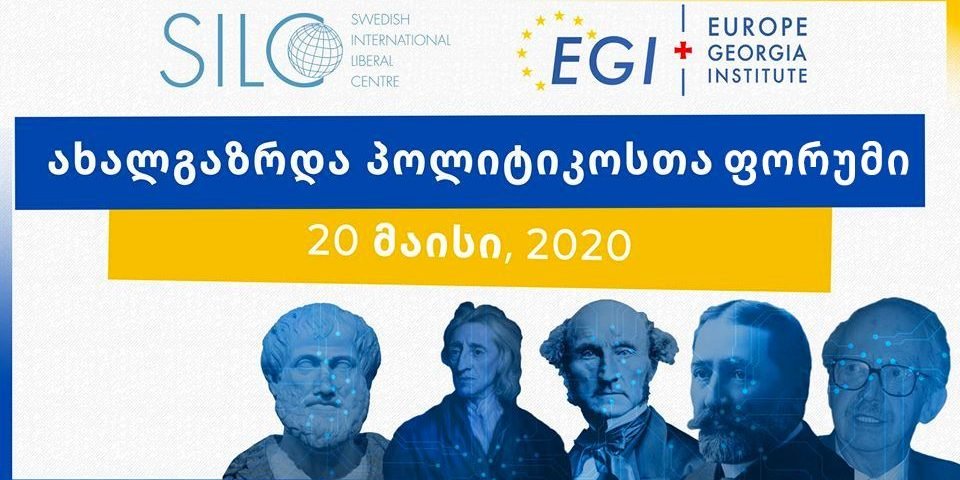 Joint project of the Europe-Georgia Institute and Swedish International Liberal Centre began with the Forum of Young Politicians on May 20.

John Runeson – the 2nd Secretary from the Embassy of Sweden to Georgia, Secretary General of SILC Martin Ängeby, Programme officer at SILC Violetta Shastina Ravid, President of Europe-Georgia Institute George Melashvili delivered welcome speeches at the beginning of the forum.

In the first panel of the forum the representatives of political parties’ youth wings discussed the participation of youth in politics. Participants of first panel were:

During the panel mostly three issues were in the center of attention: First, what role the voice of youth plays in politics, and how important their participation is. Second, what is the reality like, what are the challenges we face when it comes to youth and politics and finally, what can we do, what can political parties do to support and empower young politicians.

Party representatives talked about the gap between parties and youth, the reasons behind it and the ways of bridging this gap. They also discussed current opportunities for young politicians and presented what their parties could offer.

The panel included the Q&A part, attendees had the opportunity to ask questions directly to the representatives of parties about the issues of their interest.

The second panel of the forum was dedicated to experts and their sharing their opinions working on youth issues. They were representatives of international or regional organizations in Georgia, that are closely involved in the youth and civic awareness programs.

Panel was presented by:

The main topic on which the speakers spoke was their organizational experience, activities, and also shared some specific advice to the representatives of the youth wings of the political parties participating in the first panel.

Based on the interests of the forum participants, international examples were discussed of how to efficiently distribute information to various youth groups about acitism. In this regard, educational programs were emphasized and the importance of civic education for young people in general. Also one of the interesting topics for the discussion was how to make more active young people at the regional levels, which remains a real challenge for both developing and developed countries all around the world.

The panel ended up with a Q&A session, after which the representative of the European-Georgian Institute summarized the topics discussed during the forum and their importance for the youth.