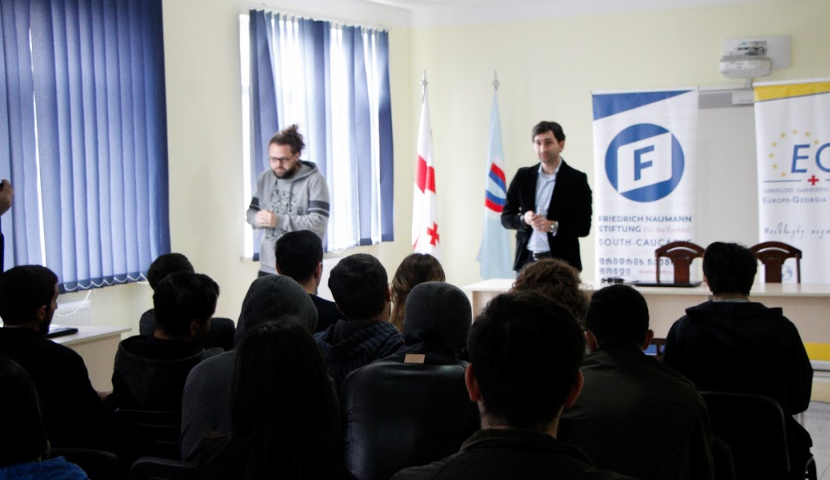 Following statements of high-ranking Georgian officials threatening freedom of speech in Georgia, the Europe-Georgia Institute together with Institute for Development of Freedom of Information and with support from Friedrich Naumann Foundation for Freedom South Caucasus initiated a campaign “Freedom of Speech 2019”. Number of meetings with students from different universities were held as a part of campaign in Kutaisi, Gorii, Batumi and Telavi. On the 16th of april the conference about freedom of speech and expression was organised at the university of Zugdidi Public lecture was held by the invited lecturer of  Black SeeUniversity  Vakho Zhvania. Lecture was moderated by Otar Nadiradze, Director of Program Functions of Europe-Georgia Institute. Participants of the conference had a great opportunity to discuss not only theoretical but also contemporary and practical issues related to the development and evolution of freedom of speech in Georgia. Role of law and topics related to the Georgian court were discussed from the perspective of Freedom of speech and expression. Students were very interested in what is the level of freedom of media and what is the role of different social media sources in the process of idea creation among the society. The conference continued during the coffee break and gave participants an opportunity to discuss interesting topics and and have a personal conversation with our guest speaker in a non-formal way.  The meeting was attended by 40+ students of Zugdidi University and high-school students, member of local NGO community and officials.