Today we continue the discussion on the impact of the EU’s Eastern Partnership at the #EFLevent – Reviving the Eastern Partnership. This time – in Tbilisi, Georgia. It was a great honor for the Europe-Georgia Institute to participate in the organization of this event.

Furthermore, as part of the event, the participants will identify and promote tools and mechanisms for a liberal approach on how the future of the EU’s Eastern Partnership might be changed. 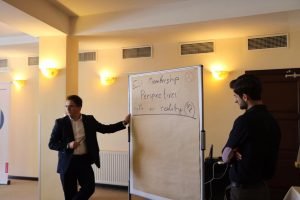 10:00-11:30 Reviving the Eastern Partnership – strategic change or continued drifting? Current situation and the developments since the official launch of the EU EP. Key findings from the first meeting in Chisinau.

The situation as seen on the ground in Georgia
George Melashvili, Europe-Georgia Institute, President.

12:00-13:00 Reviving the Eastern Partnership – the situation as seen on the ground in Ukraine
Roundtable Discussion

Working languages will be English and Georgian with simultaneous translation.