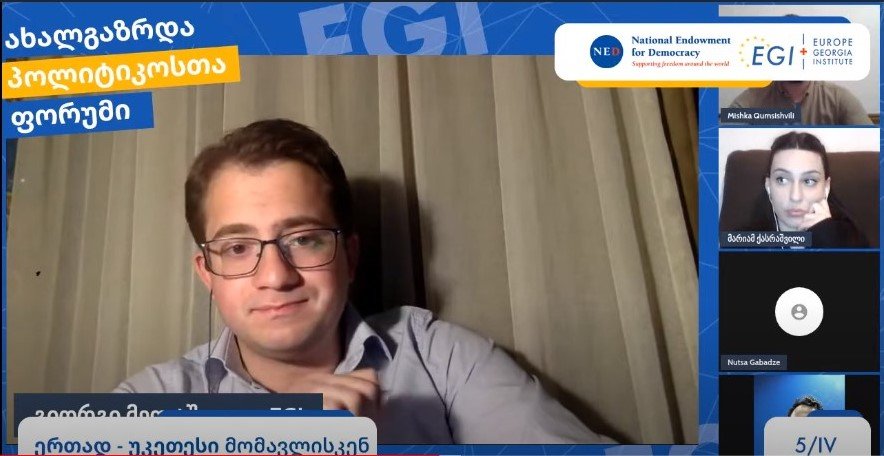 The first panel of “Young Georgian Politicians’ Forum” took place on 5th April. The topic of the meeting was: Youth and politics:Youth engagement challenges. Young politicians from 4 different parties participated in the discussion: Giorgi Chakvetadze from Georgian Dream; Mariam Kasrashvili from United National Movement; Mikheil Kumsishvili from Labor Party; Nuca Gabadze from Free Democrats. The Chairman of Europe-Georgia Institute – Giorgi Melashvili took a role of Moderator. He opened the meeting by remembering the words of the hero of Georgian National Movement(from soviet times) – Merab Kostava, where the importance of finding common ground was highlighted. He also mentioned the results of the Public Opinion Survey by IRI, which made it clear that youth engagement in politics gains more importance. This day’s panel was dedicated to the memory of a famous Georgian writer – Guram Dochanashvili, who died a few days ago.

The first speaker – Mariam Kasrashvili highlighted that the events of 20th June, 2019 demonstrated the importance of young people in civil activism. She said that after this time youth understood the importance of their voice. When talking about her own experience, she remarked that being engaged in politics in Georgia leads to insecurity. This causes radicalization and takes political processes to the streets. She stated that new faces are essential to make political processes healthier. She finished her remarks by saying that despite the unchanged environment, people shouldn’t give up.

Mikheil Kumsishvili highlighted that young people have a more sincere attitude towards western values, while some old politicians claim to support democracy and human rights only because of Western countries demanding so. He also stated that change of generations in politics must be accompanied with a deepers sense of patriotism. In addition to this he pointed out the importance of international organizations, who invest much money and effort to make young people more resourceful. Just like Mariam Kasrashvili, he underlined that there are hard times in Georgia now, but young people shouldn’t give up

Giorgi Chakvetadze, from the ruling party- Georgian Dream, mentioned some government-supported projects,like StarUp Georgia, Enterprise Georgia which allow young people to become more active. He also underlined that his party promoted youth participation by providing them with the possibility to be elected to municipality councils.In addition to this, he mentioned the importance of volunteerism. Giorgi said that lack of youth participation is definitely a problem, but it isn’t unique to Georgia. In his opinion, educational reform and professional possibilities are 2 most important ways to solve this problem..

Nutsa Gabadze talked about nihilism among young people and widespread opinion that politics is a dirty realm. She also mentioned that dependence on the virtual world makes them lose touch with the actual reality. She highlighted that young people can provide political spectre with creative and innovative ideas. In addition to this, she underlined the historical importance of youth in Georgia.

The participants discussed the on-going political crisis. The representative of Georgian Dream – Giorgi Chakvetadze said that the crisis is artificial. In his opinion young people should encourage everybody to respect the institutions. The representatives of the opposition parties disagreed with him. According to Mariam Kasrashvili the crisis was caused by rigged elections and the arrest of the leader of his party. She said that youth should express their position on the demonstration on 15th May. Mikheil Kumsishvili stated that Georgian Dream uses the institutions for their particular political interests. He highlighted the low trust of the society towards the judiciary system. In his opinion, youth should fight against injustice everywhere, including their own parties. Nutsa Gabadze underlined the importance of youth unity to solve this crisis.

Another question asked by the moderator was to depict their version of the ideal future of Georgia. According to Mariam Kasrashvili Georgia should be an ambitious pro-western country, where discussion isn’t about the existence of democracy, but about actual political and economical issues. Nutsa Gabadze thinks that concentrating on education and maintaining pro-European stance are vital. Mikheil Kumsishvili highlighted the importance of fair elections. He stated that only after this it will be possible to talk about other issues. Giorgi Chakvetadze said that in 10 years time he would like to see less-radicalised politics. He also underlined that Georgia should become an educational hub in the region. According to Giorgi, after 10 years Georgia should be a member of the EU