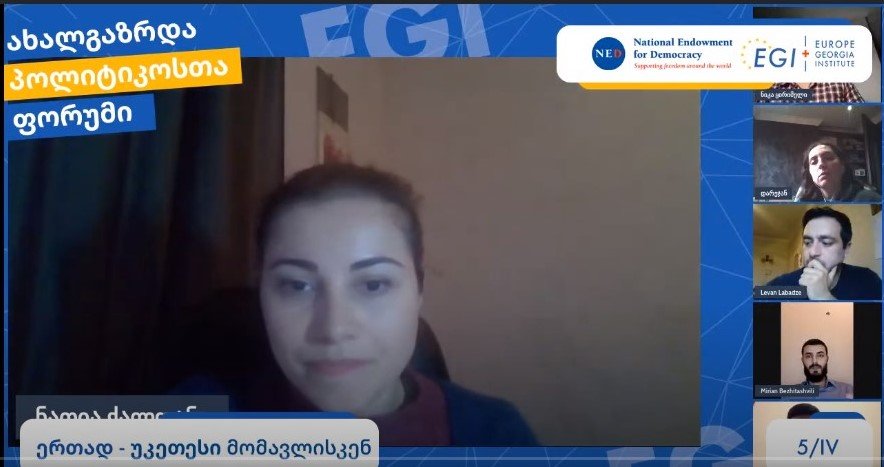 Considering the fact that the key challenge is nihilism among youth towards politics, the topic of the panel was the means of youth involvement in politics.

First speaker – Mirian Bezhitashvili from Girchi – More freedom said that his party was inclined to talk about the non-popular topics and to use the space, which is most frequently used by youth, namely- Social Web. Also they wanted to support youth involvement in politics through their “Bubble” and to encourage them to do so they tried to use the blogs, videos with the ideas of their members to be shared around the members of their “Bubble”. Mirian stressed that it is essential for youth to become familiar with the politics already from school, which is not the case today. Finally he talked about the issues such as discreditation of persons, especially women in Georgian political reality.

The second speech was delivered by Levan Labadze from Lelo – for Georgia. He agreed that it is essential for youth to become familiar with politics from an early age. He also thinks that the activities such as trips for school students to public structures would be interesting. He talked about his party’s experience. According to him, during the election campaign the young people were free to go to the party, offer the ideas and gain the support to implement them, especially in regions. Levan also stated that the party plans to launch platform “Lelo TV”, which will help youth people become even more involved in politics.

Next speaker was Darejan Pheradze from the party “Citizens”. She stated that despite the fact that the party is newly established and its structures are still under formation, volunteering young people was an engine of their campaign. They also would like to change the trend, which considers spending vast resources during campaigns into the reality when parties use less resources before the elections to gain support. The priority for them in regard to youth is education. They organize historical trips, their leader Aleko Elisashvili created video lessons about history during the pandemic.In addition to this, they organized the activity “Open Bukia” for people who love books. Also, their young members participate in youth debates such as the one organized by IRI and etc.

Another speech was delivered by Tornike Kobakhidze from “European Georgia”. He said that youth has great potential and it is essential for them to be able to use it. Nihilism about politics according to him was inherited from previous generations. According to him, it is essential for politics to become more important in schools, both during analyzing historical events in political perspective and making the school subject – civic education more prominent. He also thinks that the activities such as Political debates by IRI can be also organized on the school level. Then he talked about his personal experience of becoming involved in politics, when he became part of a protest during the events of 20th of June, 2019 – also known as “Gavrilov’s Night”. He also thinks that the youth should be able to work on parliamentary level from the age of 18 instead of 25 as set today. Finally he talked about his party “European Georgia”. According to him, youth is an active part of the political party and that they also plan to arrange Zoom meetings for the youth to meet the leaders of the political party.

The last speaker of the panel was Nika Kirimeli from “Strategy Aghmashenebeli”. Nika stressed on the importance of such forums and activities. He also stated that due to lack of youth engagement in politics, politicians don’t feel accountability towards them. He said that the corrupted politicians without professionalism cause nihilism in youth towards politics. However, if young people would like to see the different system, instead of stepping aside they should be involved even more. He stated that key actors facilitating youth involvement in politics should be political parties and non-governmental organizations. The key point is to provide youth with particular resources. Nika talked about the importance of youth camps as well. He added that his party plans to arrange such camps, especially after Covid regulations will be lifted.

After the speeches Natia Kaldani asked them what the government’s actions should be in regard to youth engagement and what type of agenda they use themselves to promote youth involvement in politics. Levan Labadze commented that economic hardships, which make youth start working from early age doesn’t leave much time for them for other types of activities. He talked about the experience of his party Lelo – for Georgia. he stated that party leaders – Khazaradze and Japharidze do all their best to empower youth. Mirian Bezhitashvili thinks that the main thing the government should do is to do nothing. They should stop discrediting politicians and politics. Meanwhile, the key point for making youth interested in politics is making creative content and sharing it in social media. He talked about the platforms such as “Girchi TV”, which also help the youth to share their ideas inside the “Bubbles”. Darejan Pheradze doesn’t agree with the idea that the age limit for parliamentary work should be decreased to 18, but she thinks that apart from working in the state institutions, the young people should have chances of internships as well. She stated that “Citizens” use educational methods for promoting youth involvement, that they also plan youth camps, while they are open for ideas and offers from the youth as well. Nika Kirimeli commented that the ruling party doesn’t take into account the views of anyone, neither youth, nor strategic partners such as the EU and the US, thus the youth shouldn’t wait that anything will be done without their active participation, therefore, they should create the agenda themselves. He stated that political parties can just assist them in this process. He added that “Strategy Aghmashenebeli” managed to receive more support than the parties which are 5 and 10 years old and this was because of active youth members. He also said that after elections the party was reconstructed and the youth have now even more functions than before. Final comment belonged to Tornike Kobakhidze from “European Georgia”. He agrees that it is important for students to receive information about the basics of politics already from schools. He also thinks that if the person at the age of 18 can vote for the party, which can form the government, this person should also have the right to be elected. In regard to experience he highlighted that some MPs with decades of experience sometimes don’t say a word during their terms at all. Following his party’s experience, he said that the people showed up with the motivation of being participants in the process. They had meetings, discussions but the Covid-19 created obstacles for this process.