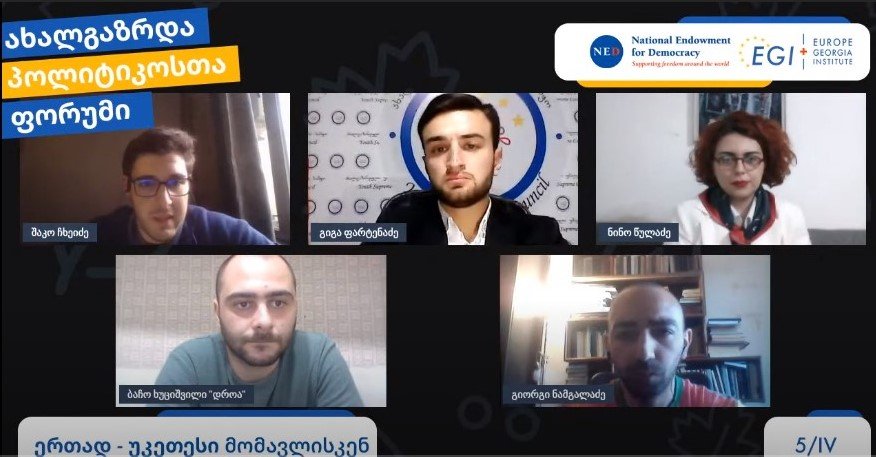 Giga Phartenadze talked about the experience of his organization of working with youth in all 6 municipalities of the Adjara region. Since 2014 they have organized projects such as “Model Youth Council”, Summer School about State Security and Voluntary Observer Opportunities during elections. He considers fighting against disinformation, understanding potential influence of youth votes and youth engagement in politics as essentials for the development of Georgian politics

Giorgi Namgaladze – representative of the Greens stated that the key point is to create the movement, which can mobilize people with different ideas. Controversially to this he doesn’t perceive efficiently the movements, which are specialized on specific topics. As he stated, the idea of greens is to create such an all-inclusive mass-mobilization movement. Potentially their movement can be transformed into a political party as well. He mentioned examples of protests related to the environment such as Batumi Riveira and Namakhvan. In his opinion these are the protests, where people have demonstrated that e politicians should engage in dialogue with people at first and only then make decisions.

Next speaker – Nino Tsuladze from the movement “For People” addressed several issues. First of all, she pointed out the communication problem between the youth and the government. She said that this is most explicitly expressed once it comes to tens of thousands of students with suspended status. Secondly, she talked about the common nihilistic attitudes towards politics. Many people feel disgusted by this field. Nino thinks that it’s essential to realize the importance of the protests as well. Finally she talked about lack of awareness among citizens about the mechanisms of engaging in politics. She stated that such mechanisms exist formally, but people don’t know about them and for this reason, they are not used properly at all.

The last speaker of the day was Bacho Khutsishvili from the movement “Droa” (It’s Time). Bacho stated that their movement is specialized on issues such as anti-occupation topics, corruption and social issues. He agreed that communication problems are a big issue in Georgian reality. He also stated that the problem of decentralization is another challenge as well. In his opinion, this is especially relevant even in regions such as Adjara, which has the status of autonomous republic. This issue is a huge obstacle for local activism, as people perceive themselves as living in peripheries, living far away from decision makers in central government. Bacho thinks that another challenge is dominance of the same group of political elites for the last 20-30 years. This issue is related to another point which is domination of media sources by the same political elites. This leaves youth without channels of communication with masses except for Social Net. Finally he stated that it is important to create as many examples of people’s demands being successfully met with specific decisions as possible, because this will increase motivation and confidence of people in their power.

After individual speeches, moderator Shako Chkheidze asked the participants the question: What is the key change which can support change of the traditional political system?
For Giga Phartenadze the key point is to unify people on the topic of occupation. Giorgi Namgaladze thinks that it is essential to take away means of setting agenda from current elites, the means such as control of media and information. For Bacho Khutsishvili the answer is in the coalition government. He stated that based on our 30-year experience of independence, anyone who comes in power with great hopes and possesses absolute power, ends up in a very bad way and that the pursuit of finding Messianic leaders should be ended. Instead, everyone should be responsible for our reality. Nino Tsuladze thinks that the key point is to change old political faces with the new ones, as far as people are tired with the same faces for the last 20 years. She stated that this point was proved by the results related to attitudes of people towards political figures in the IRI opinion polls, February 2021.