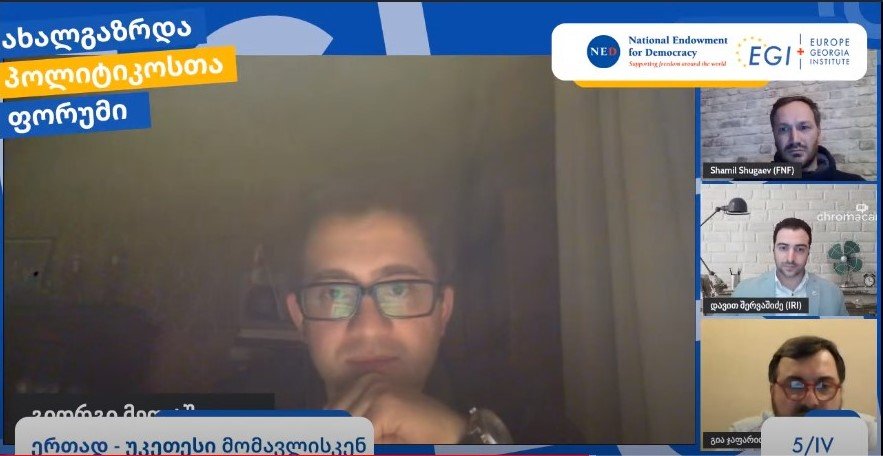 The last day of “Young Politicians’ Forum” was presented by the speakers from local and international organizations, which are intensively working with youth in Georgia. Those were Gia Japharidze from Chavchavadze Centre, Shamil Shugaev from Friedrich Naumann Foundation for Liberty – Office of South Caucasus and Davit Shervashidze – International Republican Institute. The panel was moderated by George Melashvili.

First speech was delivered by Gia Japaridze. He has overviewed the importance of youth involvement in politics historically. He recalled activities carried out by Ilia Chavchavadze from his early years, dissidents in 1956 spreading proclamations during the soviet totalitarian regime with the demand of independence of Georgia, protests in 1978 to protect the status of Georgian language as a national language, the protests in April, 1989 with the demand of independence and finally Rose Revolution led by young activists in 2003, who were tired of corruption and nepotism inside the country and demanded the change. He stated that regardless of the existence of numerous problems today, youth isn’t as active as in those examples. He highlighted that this new generation was born in the independent state of Georgia. In his opinion, this truly makes them special. He hopes that in due time this generation will be ready to bear their share of responsibilities. He believes that it’s essential to work and communicate with young generation regularly, in order to empower and encourage them to get involved in politics.

Second speaker – Shamil Shugaev agreed with the first speaker with the point that youth has a great responsibility to be active in politics. He stated that nihilistic attitudes towards politics is caused by the issue of private interests in the public sphere, which dominates over the national interests, making politics look like a dirty field for youth. For him it is essential to overcome this issue. Also, he stressed that it is important to make people aware of politics as a process of dialogue, field for compromise, where agreement is not betrayal of principles. Namely his priorities are peace, security and interests of individuals – none of which are fully accomplished in modern-day Georgia. In his opinion this is caused by lack of intensive and high-quality involvement of people in politics on all the levels. He discussed the lack of trust towards current political elites and necessity of new faces in politics as well. Later he talked about the activities of Friedrich Naumann Foundation, public lectures, trainings, seminars, summer and winter schools, activities such as “Political Didactics”, program about journalist investigation for media-representatives and other projects carried out in partnership with their partners such as Europe-Georgia Institute, New Economic School and Students for Liberty.

The last speaker – Davit Shervashidze from International Republican Institute talked about partnership of IRI with local political parties and later civil organizations in order to increase involvement of youth in politics. He talked about the umbrella entity of Generation Democracy and their last project – You-Lead. He talked about the reality that each political decision influences different parts of our personal lives, thus it’s essential to be involved in politics. He commented on IRI’s opinion polls as well, which aim to help political parties better realize demands and interests of the society. Davit Shervashidze talked about the “Youth Political Debates” broadcasted on TV as well, which helps young politicians discuss particular issues and elaborate on solutions live on TV since 2009. The project aims to change or at least improve political culture in Georgia, which is a huge issue today. He stated that it is important to put an end to personal confrontations and revenge in politics, so the people with different ideas and ideologies will work on the ways of reaching the common goal – development of the society.

After individual speeches George Melashvili asked the speakers – what is the key obstacle for youth involvement in Georgian politics today. For Shamil Shugaev the key challenge in this regard is the educational problem and also the temptation of political elites to maintain the power for the sake of their own private benefit. Davit Shervashidze agrees that the key challenge is an education, He thinks that schools don’t prepare students for life today, they are more oriented towards factual knowledge. The challenge is demonization of particular groups of society as well, such as NGOs. He highlighted the importance of separating politics and private benefits as well. Finally, he said that it is essential to create a fair competition and break the negative stereotypes about politics. The solution is education, including the informal one. Gia Japharidze also agreed with the point related to education. He added that in essence the education system in Georgia is the same as it was during soviet times. The only achieved success is its liberation from corruption and bribes. He is also suspicious that technological development and Social Nets discouraged youth involvement in politics and transformed their activity into “Activism of the Keyboard”. He thinks that the youth struggles with the issue of self-determination as well. In addition to this, he talked about the issue of private benefit and corruption, as the main driver of motivation for individuals in politics. He stressed the importance of transformation from “the culture of monologue” to the one of “the dialogue” and the youth activities as well. Finally he talked about the youth activities that his organization – Chavchavadze Centre organizes.