Strong Self-Government – the Cornerstone of Democracy – that was the name of the project carried out by Europe-Georgia Institute, that was supported by the US and Swedish Embassies in Georgia, aiming to popularize the innovative floor game “Archevneti” (Originally “Electionville” – created in Sweden by Svienska Institut). The objective of the game is to help the students better analyze the processes in Local City Councils. The project had up to 10 beneficiary schools and lasted for two months.

The project composed of three basic stages:
1. Selection of the beneficiary schools
2. Thematic Workshops with schools from Chibati, Kaspi and Tbilisi. The workshops composed of two parts – thematic session on the topic of self-government and contest in the game “Electionville”.
3. Final activity in Bakuriani for 6 winner teams of “Archevneti” local school contests.

The first meeting of the project took place in Guria, in the village – Chibati. Local public school hosted the workshop. The teacher that hosted Europe-Georgia Institute in Chibati was Lado Apkhazava – the Finalist of Global Teacher Prize from Georgia. Following up the activity, Apkhazava stated, that it was of utmost importance to integrate such tools in Formal education process, because the students are far more engaged and at the same time they experience in practice whatever they had to learn theoretically with standard school lessons. The workshop was attended by up to 40 students. In the last activity (The Game itself) 4 teams and 16 participants took part. The winner team of “Archevneti” game attended the final activity taking place in Bakuriani

The final event of the project took place in Bakuriani in July in the hotel “Auroom”. The activity composing of three days was attended by the winner teams of the local contests that took place in Chibati, Tbilisi and Kaspi. 24 students, 6 participants and EGI staff members took part in the activity. Activity composed of two key parts: 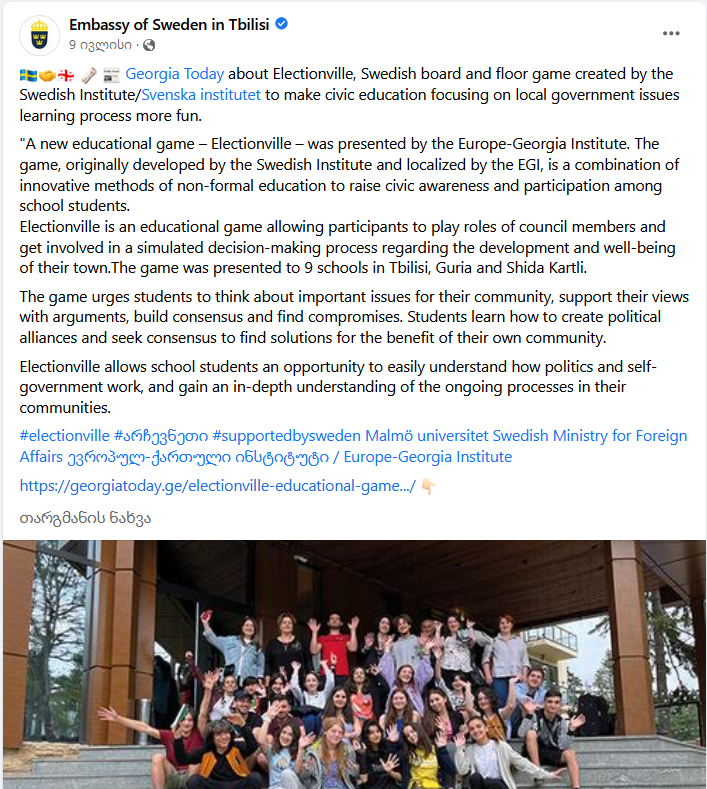 The publicity of the Project was mostly achieved via sharing the information on Facebook Page of Europe-Georgia Institute. The page has 23 817 followers and almost same number of people who liked the page of the organization.

Apart from it Embassy of Sweden in Georgia was actively sharing the content related to the project. The game (originally – Electiobville) was initially created by Svienska Institut. Europe-Georgia Institute translated the game and adjusted it to Georgian context with the support of Embassy of Sweden in Georgia. The US Embassy in Georgia made it possible to organize the whole project that further popularized the game and made it possible to put it in practice by the local schools.

Embassy of Sweden about an Article written by Georgia Today (Facebook) 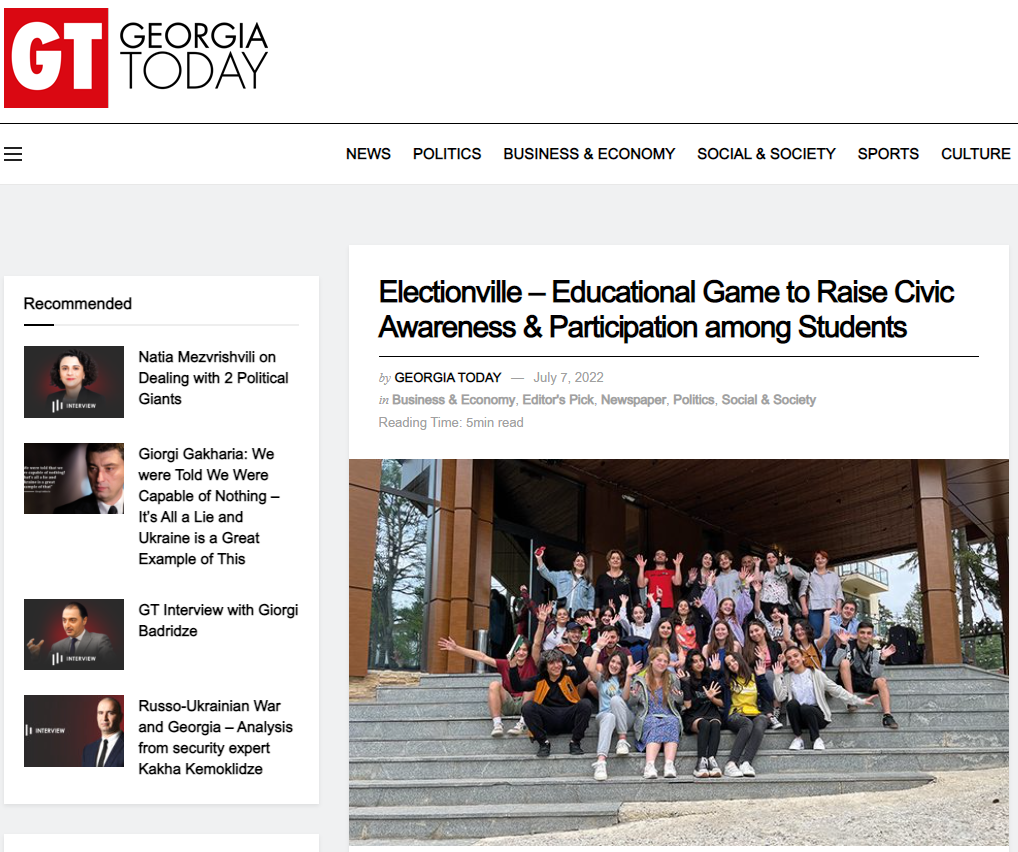 One of the most prominent English-language Georgia-based media platforms – Georgia Today also wrote an article about the project and “Archevneti Game”.

Article of Georgia Today about “Archevneti”